The Israelite Destiny of America 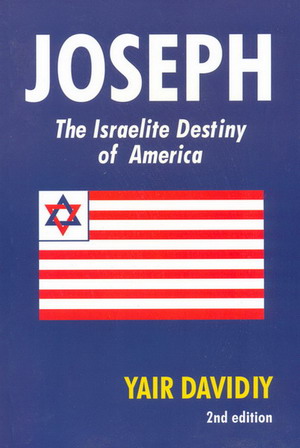 Duration ca. 5.5 minutes
Joseph. The Israelite Destiny of America. The sons of Joseph are represented by Britain and her offshoots (Ephraim) and by the USA (Manasseh). Immigrants to the USA from Germany and the rest of Europe were sociologically and ethnically different from those who stayed behind. They represent the descendants of Israel separating themselves from non-Israelites. Descriptions of Joseph in the End Times pertain to the British Empire and the USA.

The Blessings in the Bible given to the Children of Israel were epitomized most strongly in the Tribes of Ephraim and Manasseh. Ephraim dominates Britain and her daughters, Manasseh is pre-eminent in the USA. "Joseph - The Israelite Destiny of America" proves it!

New evidence is produced showing how the Tribal names of peoples who settled in Britain and later in America were those of the Ancient Israelite Tribes of Ephraim and Manasseh, the sons of Joseph.

Rabbinical Tradition from an early date or based on very early sources described the Tribes of Joseph in the End Times. The descriptions can only fit Britain and North America.

An historical-sociological case study of entire areas in the USA is analyzed in the light of Biblical Commentary and tradition. This enables us to trace different clans of Manasseh to specific areas of the USA.

People who migrated to America from Germany on the whole were not really Germanic but rather Hebrews who had kept themselves apart the rest of the population. This is proven by contemporary reports and other sources. The Prophet Isaiah foresaw the British Empire ruling over India and Egypt. Isaiah also predicted that Africans would be brought as slaves to North America.

"Joseph. The Israelite Destiny of America" quotes from Rabbinical Authorities concerning the Messiah son of Joseph. Relevant extracts are discussed and their pertinence to Israelite Identification in our time demonstrated.

"Joseph. The Israelite Destiny of America" is still the ONLY work that adequately deals with this subject!

Biblical and Rabbinicial sources indicate that:
The Israelites of North America will be redeemed before all the other Lost Tribes are.

"Joseph" breaks new ground and is of great interest and importance.

"Joseph - The Israelite Destiny of America" is now selling for ONLY $15!

"Joseph" places an emphasis on the Israelite origins of the American people.