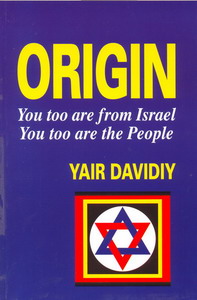 The "ORIGIN" of several peoples in the west today is from Israel.  The Bible tells us who really is descended from the Lost Ten Tribes.History, archaeology, mythology, genetics, linguistics, and all other related disciplines confirm this. Scripture is true. This message pertains especially to citizens of the USA, Britain, Canada, Australia, New Zealand, and South Africa all of whom relate to the Patriarch Joseph. Some of the countries of Western Europe also have a significant proportion of people descended from Israelite Tribes in their population. The existence of Israel fulfills the purpose of creation. The good of Israel is the good of the world. In Scriptural terms, there are two halves of Israel represented by "Judah" and "Joseph". Both "Judah" and "Joseph" have their own uniqueness and their own role. Ultimately Judah and Joseph must re-unite with each other. Each side is incomplete without the other and cannot fulfill its own task without the other. Even before re-unification the closer the two sides work with each other, recognize each other, and assist each other so much the better: The closer we will come to ultimate Salvation. A prior condition for even beginning the process of Redemption is the recognition and mutual respect each side must acquire towards the other. Most of "Joseph" does not know who he is, nor does Judah know who "Joseph" is. "Joseph" must consciously recognize himself; Judah must be made aware of Joseph. Judah and Joseph must draw together. Present day events have laid the groundwork for this process but it needs to be speeded up. Time is running out. Instinctive sympathies that now exist between the two parties need to be recognized as an arousal of family consciousness.

"ORIGIN", is intended to summarize the most vital points of all research on the subject until now. This is what "ORIGIN" does, as well as providing important new insights and information. By acquiring the knowledge revealed in "ORIGIN", internalizing it, and helping to spread this awareness you will be serving your people, and all Israel. You will realize where you came from and where you should be going. You will know your "ORIGIN". By "you", we mean both the individual and the nation of which he is a part.
The first part of "ORIGIN" explains how the majority of Ancient Israelites were exiled, where they went to, what they became, and how we may recognize them through the mists of time. This is the historical evidence. The second part of "ORIGIN" goes right through the Hebrew Bible according to the literal meaning and also in the light of Rabbinical, linguistic, and other sources. The "ORIGIN" of the British and North Americans and their kinfolk in the west is from Israel. The evidence is plentiful and compelling. "ORIGIN" provides important new insights and information. "ORIGIN" summarizes the most vital points of all research on the subject until now. According to Scripture the "ORIGIN" of very many individuals and communities in the west today is from Ancient Israelites who were exiled and lost consciousness of their "ORIGIN". The Blessings to Joseph are reflected in the official symbols presently used by the USA and the UK. This book will impart a new awareness of your "ORIGIN" to you. This is your "ORIGIN"! You too are from Israel! You too are the People! Read, see, and know. "ORIGIN" is for you and about you.
When we wrote "ORIGIN" we intended to create a work that would make for fast enjoyable reading of the utmost value. We hoped to give the reader a good over-all picture of the most important points they needs to know concerning his "ORIGIN". This is what we have done.
"ORIGIN" has an approbation from Rabbi Avraham Feld of the Maccabee Institute in Israel.
"ORIGIN" by Yair Davidiy was published by Russell-Davis Publishing, Jerusalem, Israel, 2002.