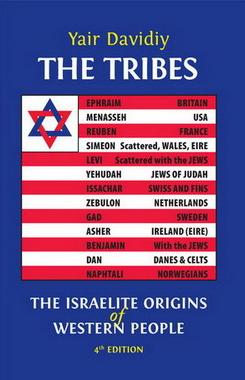 "The Tribes. The Israelite Origins of Western Peoples" was first published in 1993. Since then it has been through several editions.  This present 5th edition contains additional information and editorial improvements.  Nevertheless the overall presentation and the basic message remain the same. The Ten Lost Tribes of Israel are today to be found mainly among Western Peoples. It is there that they came to fruition as Israelite entities and achieved their Tribal expression as had been prophesied. This work proves it.

The Jews of Judah and the Ten Lost Tribes are two parts of the one body.  A significant and influential portion of the peoples in Western Europe, Britain, and North America have the same ancestry as the Jews. This fact has influenced the historical behavior of the said nations. These peoples have often shown as attachment to the Bible, meaning especially to the "Old" (Hebrew) Testament. On the whole their overall national tendency has been a striving for the general good and justice for all. It is obvious that these goals have not been achieved but attempts have been made.  For that matter,  no claim is being made that all of these peoples are Hebrew or that Hebrew ancestry is always good. A specific influence is being considered as attributable mainly to the contribution of definite groups who, to some degree, probably merged with others of possibly opposing inclinations.

The Promise to Abraham – A Prerequisite for Greatness

Abraham was the first ancestor of the Hebrew nation and of him it was stated:

Genesis 18: 18 Abraham shall become a great and mighty nation, and all the nations of the earth shall be blessed in him. 19….  he will command his children and his household after him, and they shall keep the way of the LORD, to do justice and judgment; that the LORD may bring upon Abraham that which He hath spoken of him.

This blessing implies that becoming "a great and mighty nation" was not only an effect of the promise. It was also a PREREQUISITE of having all the nations of the earth being blessed in him and he doing justice and judgment. Similar verses in the Bible expound on this theme and add detail to it. We will return to this subject. Out of all the Twelve Tribes, the doing of justice was to be especially associated with the Tribe of Joseph.

Among the nations identified in this book as being of the Israelite seed of Abraham were those who conducted colonialist policies from the eighteenth to twentieth centuries. The overall effects of colonialism, in most cases, were very beneficial -despite claims to the contrary. French, British, and Dutch colonialism put a stop to internecine warfare, ended human sacrifice and slavery, founded and/or improved irrigation-systems, reformed agricultural practices and public hygiene, built bridges, roads, public works, and so on. Wherever they ruled the local population greatly increased in numbers, in health, and in respect for basic human dignity. The colonial powers also often (but not always) made large profits for their own citizens and helped themselves by exploiting opportunities for investment, which the subject countries offered. This investment usually benefited all parties. This was part of the blessing of Abraham: The power was given and it was used for good, even though in some cases the initial conscious motivation in colonization was a lust for power and material gain. Colonies often accrued to the British Empire due to dynamics beyond the conscious control of the British themselves! The overall effect of colonization was beneficial. Altruistic motives were also present and implemented. Even today these peoples remain the only real morally motivated advancers of international justice in this world. Even if this morality is often misapplied or self-serving or strangely selective there does exist a genuine will to do the right thing overall. On the whole the effects are positive.

We Are Not Racists!

Another point is that the above statements and the historical material revealed in this book are not coming to support any racialist or other theories. Scripture tells us that ALL of mankind is descended from one ancestor. The characteristics of everyone else are potentially present somewhere in each of us! The peculiar behavior of any group may, in part, be attributed to the effects of climate, environment, geographical location, historical factors, and cultural influences. All of these are largely beyond the control of whoever is affected by them. NEVERTHELESS, for whatever reason, a promise was made to Abraham. It was unconditional. The prediction had therefore, at some time, to take place; and to some extent so it has -in the above mentioned nations. Whatever caused this occurrence in the immediate sense is relatively inconsequential.

The historical proofs in this book, thus, have potential significance beyond that of academic study. The said evidence may be of importance in helping many peoples understand both their own past and their present obligation and potential. An important message of this book involves the ancestry of many people in the western world today. Our historical study indicates Israelite ancestral identities. These entail hereditary characteristics and obligations. The exiles from the Northern Kingdom were divided into major sections. One part was taken overseas to Spain and its neighborhood. From there they moved to Ireland, Britain, and Gaul. A settlement was established in Bronze Age Scandinavia. The second and major section was moved to the fringes of the Assyrian Empire. They went to Northern Mesopotamia, the Caucasus and Zagros Mountain areas and Eastern Iran.  From these regions they were to move northward and to the west. Eventually the different pathways converged. In the process the Exiled Hebrew had adopted aspects of "Celtic" and "Germanic" civilization.

Prior to all that, they had been transferred en-masse from the Holy Land. In Israel they had been part of an ethnic formation with Twelve Tribes. Each Tribe was divided into smaller familial groupings and sub-clans. The Assyrian directed relocation of these "Israelites" was accompanied by the partial breaking up and scattering of the Tribal units. Nevertheless, enough of the original organizational patterns were to be maintained in their places of exile to enable the identification of historical groups with Israelite entities and to trace their subsequent movements.

The identifiable Israelite-descended peoples were destined to reach and settle in West Europe. Here too, the same Tribal and Tribal clan equations are possible. What exact percentage of Israelite parentage exists in the relevant nations wherein these groups settled is uncertain. It must however be substantial. At all events, wherever else parts of the Lost Ten Tribes of Israel may or may not be, their overwhelming majority migrated to the above mentioned areas, as the following pages show.

This work, "The Tribes," is divided into Three sections.

Part One:  Movement to the West.

Abraham the first Hebrew was promised that from his seed would emerge a great and mighty nation (Genesis 18:18-19) through whom all the nations of the earth would be blessed (Genesis 12:2-3). From Abraham, Isaac, and Jacob emerged the Twelve Tribes of Israel. They split into two separate nations: The Kingdom of Israel in the north consisted of Ten Tribes. In the south was the Kingdom of Judah. Later, the Assyrians conquered the Kingdom of Israel and took the Ten Tribes into exile where they lost consciousness of their ancestry.  They became identified as part of the Celtic, Cimmerian, Scythian, and Gothic peoples and with others. They moved into Western Europe. Meanwhile from Judah, Benjamin, Levi, and minority remnants of the other Tribes emerged the Jewish People. The Jews were also expelled from their Land and exiled. Centuries of persecution culminated in the Holocaust. When this took place, the British and Americans fought Germany and thus saved the Jews from intended complete extermination. Modern Zionism and the return of the Jews to the Land of Israel owe something to support and encouragement from Western Gentile nations, especially the English-speaking ones. These are in part descendants of Israelites. Despite much ambivalence and the presence of Jew hatred we infer that the Israelite ancestry of the said peoples helped bring about a relatively pro-Jewish attitude. These peoples have brought great benefits and a humane civilizing influence to the whole of mankind.

The physical type of many of the Ancient Israelites was similar to that of Western Peoples as shown by Biblical references and archaeological findings. We deal with this matter as much for the interest it arouses as to its importance.

Historically, the Assyrians exiled a portion of the Israelites by sea directly to the west. These went to Spain, Britain, and other regions. Those in Spain moved northwards and into the British Isles. Most of the exiles had not been taken directly overseas but rather overland into the Assyrian Empire. In these federations. Descriptions in the Bible and Talmudic Literature of the Ten Tribes, concerning their locations and activities, correspond to what we know about the Cimmerians and Scythians. The movements of these groupings to the west are described. They were to merge with others of Celtic and Northern culture.  The Celtic and Northern languages as we now know them contain significant Hebrew infusion and sub-structure.